It’s funny how you sometimes the most powerful statements require no words at all. That becomes abundantly clear when you see Dancing Sky Theatre’s production, Pandemics Pratfalls & Prayers. The performance was designed as a response to the past year and the experiences we’ve shared because of the pandemic.

“There’s a huge rush to get back to ‘normal’ but as an artist I thought it was a good idea to hold off. To have a think on it.” 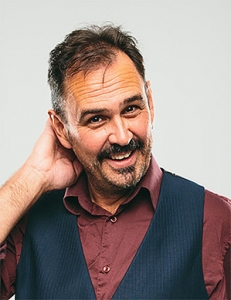 “It seemed strange to me that in this post-pandemic world no one was exploring what had just happened,” says director Angus Ferguson. “There’s a huge rush to get back to ‘normal’ but as an artist I thought it was a good idea to hold off. To have a think on it.”

This outdoor performance is unlike anything the company has done before, it blends physical comedy, choreography, music and, most importantly, giant masks to explore the hardships and humour we’ve shared. To pull it all off, the company turned to master puppeteer Crispi Lord. Seniors, children and even a pack of gophers were built out of paper mâché and paint to bring this show to life.

“Coming from a world full of Zoom calls, and only faces on your screen, it’s wonderful to explore a story this way,” says Lord. “With masks, it’s all about your body and movement and it’s such a joy to perform this way.”

To create this collective story, the cast and crew drew inspiration from the characters Lord created.

“With a panto, we usually start with the story first and this time, we worked backwards,” says Ferguson. “We had the characters, tiny houses, deer, gophers, puppets that fly; we’ve used all this imagery to create a story that explores the beauty and resilience of our world.”

Music by Saskatoon’s own Sheldon Corbett also plays a pivotal role. Joined by the cast, they sing songs about the time we’ve spent in isolation and where we go from here.

“My favourite part is when the audience leans over to each other during the show and talks about it as you’re performing. When a show is non-verbal, there’s space for that ‘Oh my gosh!’ moment,” says Lord. “They’re reacting in real time, recognizing characters, relating to them. It makes it very personal.”