Second time’s a charm for Valle at jazz fest

Denise Valle has been all over social media, television and mainstream media the past few weeks.  It’d be easy to assume she’s an overnight sensation but the truth is, this is the culmination of years of hard work on her sound.

“This is the year I decided to go all in with music,” says Valle. “Life circumstances made me feel like it was now or never. I left my nine to five job and haven’t looked back. I wanted to say that I gave my music a try, that I gave it my all.”

That determination has paid off most recently, when Valle was asked to open for Questlove of The Roots at the Remai Modern’s Summer Solstice Party. It was confirmation she was on the right path.

“Even when there’s a bad day, it always seems like there’s good that follows and it makes the frustration and hassle worth it.”

“I screamed at my computer I was so excited,” exclaims Valle. “That’s just real talk. Artists have really good days and even when there’s a bad day, it always seems like there’s good that follows and it makes the frustration and hassle worth it.” Questlove was headlining the SaskTel Saskatchewan Jazz Festival at the Bessborough Gardens but he made it to the Remai Modern just in time to catch the last part of Valle’s set. 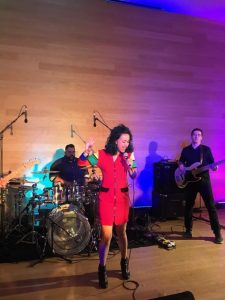 “I saw him come in with security on the last song, it was such an honour to have him hear my music live,” she says. “It feels incredible as an artist to have your name attached to someone of that calibre. It’s reassurance that you’re doing what you were meant to do.”

Valle’s summer plans are packed with music. She still has two R&B infused shows to perform at the jazz festival. She hits the Nutrien Free Series in the Bessborough Gardens on Thursday night and then on Saturday, Valle will play a more intimate show at the Alt Hotel. Not bad for her sophomore year at the jazz festival.

“There’s less acts this year so that makes it an honour to be chosen to perform,” says Valle. People are paying attention to my music and what I’m trying to do. The jazz festival was always a summer highlight for me growing up and performing at it now is really exciting.”

Valle will also be hitting the road for performances at this year’s Ness Creek Festival (July 18 – 21) and at the Gateway Festival (July 26-28) alongside artists like Kim Mitchell, Trooper and Charlie Major.

After her summer performances, Valle is hitting the studio. She’s hoping to release her first album this winter. She says her summer schedule is confirmation she made the right choice a year ago.

“I see this as a sign that when you follow your passion and it’s really what you’re meant to be doing, it all falls into place.”