Local boy gets surprise from Walk Off The Earth

They are known the world over for cool covers and  YouTube views but today, in a Saskatoon hospital room, band members from Walk Off The Earth are known best for brightening the day of a 5 year-old.

Hugo Romanski is no stranger to hospital visits. He has Down syndrome and he’s been in and out of the hospital for most of his life with immune deficiency and recurrent pneumonia. Through all the ups and downs, music has always brought him joy. His favourite band, you guessed it, Walk Off The Earth.

“When they were at the jazz festival two years ago, my husband was watching a video of them performing on his phone,” says Hugo’s mom Kath Stevenson. “With his health issues, there’s a lot of sitting still and waiting when we visit doctors or go for procedures. We started using the bands music videos as a way to entertain him during those long hours. He loves watching what happens on the instruments as they play. He emulates what they do and plays along.” 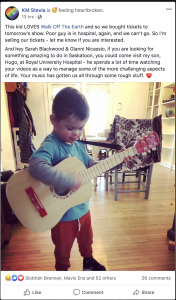 When the SaskTel Saskatchewan Jazz Festival announced in April that Walk Off The Earth would be returning to the festival on opening night, Stevenson knew Hugo had to go.

“A normal indoor concert setting can be overwhelming to him, this show was perfect,” Stevenson explains. “At an outdoor venue like the Bessborough Gardens, we can be as close or as far away from the stage as he’s comfortable. It would be his first time really understanding that what he sees on his iPad is actually real people making music.”

Unfortunately though, Hugo’s little body didn’t co-operate with their concert plans for tonight. He was admitted to hospital on Wednesday and that’s when Stevenson put her tickets up for sale.

“We tried to figure out if there was a way we could swing it, taking oxygen with us but, with the rain forecasted and the show being so late, we just decided it wasn’t fair to his little body,” says Stevenson.

Friends began to share the post on Facebook Friday morning. Soon word got to the band and plans were put in motion. Over the lunch hour Hugo’s hospital room was filled with the band including Sarah Blackwood, Gianni Nicassio and Joel Cassady. They were there to play Hugo his favourite songs Gang of Rhythm and Taekwondo.

“At first Hugo was in complete shock,” says Stevenson. “He just kept holding my had super tight. I’m sure he was overwhelmed that his iPad had come to life. But, I know he loved every minute because he cried when they left.”

Luckily for Hugo, his mom is not giving up on him seeing Walk Off The Earth on a big stage. Last night the family bought tickets for the band’s August show in Drumheller.

“We’re just hoping his body is at a high point,” says Stevenson. “We can go see the band and sing along. Of course we’ll also see the dinosaurs!”

The SaskTel Saskatchewan Jazz Festival opens tonight and runs until June 30. There are still a few tickets available for Walk Off The Earth tonight.

Walk Off The Earth