Love, obligation and the family farm on stage at Dancing Sky

It’s a story of a family thrown into crisis. Dancing Sky Theatre is getting set to give the world a first glimpse of Daniel Macdonald’s brand new play Blow Wind (May 11 – 27, 2018). The show was commissioned by the theatre company to round out its anniversary celebrations.

The story is of Kathleen, played by Saskatoon actor Cheryl Jack, the matriarch of the family farm who begins showing signs of dementia. She’s faced with the decision of who will take over the farm. 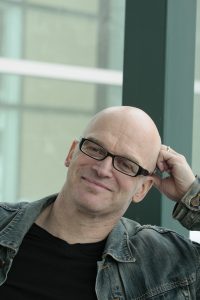 “The play was inspired by Shakespeare’s King Lear but it isn’t an adaptation,” says Macdonald. “There’s themes that are similar like mental health in people who are aging but this is a play that also looks at the loss of the family farm and the impact that has on the family members.”

Music is a huge part of this show and that’s where Saskatoon’s Eileen Laverty comes in. Laverty has composed six original songs for the show as well as several instrumental pieces. She performs live alongside the cast and serves as a kind of narrator within the piece. This production marks Laverty’s theatrical debut and she says it’s been an amazing challenge.

“There’s so much rich material here.”

“There’s so much rich material here,” Laverty says. “I tried to write songs that would fit the moment or mood but these are also pieces of music that will stand on their own.”

Mcdonald says the music helps push the play in powerful directions. “Music takes you to a place that simply speaking can rarely do. It can heighten drama and smooth transitions from one scene to the next. It’s been a pleasure incorporating her beautiful music into the play.”

Blow Wind deals with the slow loss of a family member and it’s a subject Macdonald expects will hit home with the audience. “I’m always emotional in rehearsal and before opening a new play it always hits me that people actually want to come out and be a part of it. It’s definitely not something I take for granted.”