GTNT marks 20 years of fun on the Rez with Mekiwin: The Gift

It’s a big year for Gordon Tootoosis Nīkānīwin Theatre as it celebrates 20 years of The Rez Christmas Story. For two decades the GTNT team has brought Curtis Peeteetuce’s series to the stage and this year, they return in front of a live audience at the Broadway Theatre with Mekiwin: The Gift. 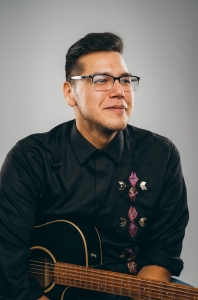 Danny Knight returns to direct this much much beloved series. (Studio D Photography)

Danny Knight says he’s loved being a part of the Rez over the years as a sound designer, actor, and this year as director, his second time at the helm.

“It shows Indigenous lives with all the humour and our own spin on Christmas.”

“It’s wonderful to have this series that’s Saskatchewan born, created and produced for the stage.” He says, “It shows Indigenous lives with all the humour and our own spin on Christmas. It’s so nice to be behind the wheel for this show.”

Mekiwin: The Gift follows the three kohkoms as they try to manage the hustle and bustle of the holidays. Zula Merastee is expecting company this Christmas as Sihkos lies in the hospital after accidentally being struck by a snow blower and Clare, eavesdropping on the doctor, finds out Sihko’s condition might be more serious than they had thought. There’s plenty of laughs, love, and miscommunication along the way.

Wanita Singing Bird is back playing Sihkos and says this year a little comedy from the Rez is exactly what the doctor ordered.

“This series brings a feeling of warmth, family and community to all of us.” 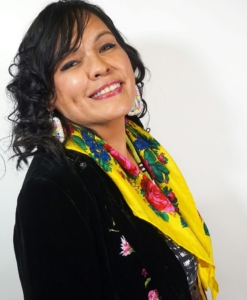 Bird used her own family as inspiration to play Sikhos. (Photo provided)

“This series brings a feeling of warmth, family and community to all of us,” she says. “The world has been through so much difficulty lately and I wanted to help bring light and laughter to the people.”

To get ready for this performance, many of the cast and crew have tapped into their own family for inspiration.

“I’m using my own kohkoms as a guide,” says Knight. “They are always kind-hearted and tender in the world but at the same time, they can lay down the law when necessary.”

“I have my mom and her 13 siblings. They are all in their 70s and I study them,” says Bird. “I see the way my aunties and my mom tease each other with Cree humour. I tell them, ‘I used that in the play!’ and they are like, ‘Ah! Oh yeah, I see her.’ and laugh.”

The story is full of fun and, at its heart, it’s about connecting to community with a hilarious Indigenous story.

“I always liked the tender moments in these plays mixed with the comedy,” says Knight. “I loved playing one of the kohkoms in the past and now, it’s an honour to direct… I do miss the dress though!”