Baptiste & SSO deck the halls with songs from A Cree Christmas

From an early age, Falynn Baptiste dreamed of performing for a big crowd. This holiday season, she’ll join the Saskatoon Symphony Orchestra in its Holiday Pops! Saturday Dec. 4 at TCU Place.

“I remember as a little girl praying that I was going to sing in front of people in a big stadium,” she says. “Now that I’m about to perform with the symphony, I feel honoured. I love connecting and sharing this gift God gave me.” 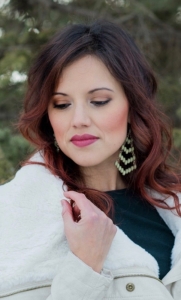 Falynn Baptiste says singing traditional Christmas carols translated into Cree is a tribute to her own spirituality. (Nikixie Photograpy)

Baptiste, a teacher at E.D. Feehan High School, was raised on the Red Pheasant First Nation in a Cree speaking home but says as she got older, she lost touch with her Cree and Métis roots.

“I left behind my language, culture and traditions to try to be successful in the non-Indigenous world,” she says. “It took me until I was 30 to realize how important the Cree language was to my identity.”

Baptiste immersed herself in Indigenous languages study at the University of Saskatchewan and becoming a Cree language teacher dedicated to preserving it. It’s what led her to blending her love of music and the language into releasing A Cree Christmas (2020), an album that translates traditional Christmas carols into Cree. The recordings grabbed the attention of SSO executive director Mark Turner.

“The SSO loves highlighting local artists and it was clear Falynn was the perfect fit,” Turner says. “Her voice is beautiful and it’s so moving to hear Christmas carols in a new way.” The holiday spectacular will also feature guest conductor Maria Fuller returning to the podium.

Baptiste says singing songs we all know holds tremendous power when they are translated.

“You can listen to the Cree lyrics and draw parallels to the English lyrics you know. It doesn’t matter if you speak the language or not. It touches your soul.”

“Christmas is a special time, people connect to the emotion in the songs, and they are instantly familiar,” she explains. “You can listen to the Cree lyrics and draw parallels to the English lyrics you know. It doesn’t matter if you speak the language or not. It touches your soul.”

The SSO’s seasonal offerings don’t end with Holiday Pops!, the Chamber Ensemble will be presenting A Winter’s Journey Friday Dec. 17 at St. John’s Cathedral featuring Aurora Voce with conductor Jennifer Lang and spoken word by Carol Greyeyes. Both holiday offerings will be broadcast digitally on ConcertStream.tv.