It seems counterintuitive that a musical performance addressing climate change would have its roots in a computer algorithm but, that’s exactly what’s at the heart of the Saskatoon Symphony Orchestra’s [UNCERTAIN] Four Seasons.

This performance is part of a worldwide project taking Vivaldi’s The Four Seasons and recomposing it using climate change predictions for 2050. Each of the 14 geolocations has its own score written using an algorithm created by data scientists, composers, developers, and musicians. SSO guest conductor Geneviève Leclair says the while you’ll recognize elements of Vivaldi’s original piece, the changes are very unsettling.

“In the music, we hear unsteady tempos as our seasons become less steady, there are beats missing, percussion added and sudden peaks of high intensity. We hear, in real time, the changes in the music just as we see in our seasons.”

“We see the effects of climate change all around us, extreme weather and it’s becoming more so,” Leclair explains. “In the music, we hear unsteady tempos as our seasons become less steady, there are beats missing, percussion added and sudden peaks of high intensity. We hear, in real time, the changes in the music just as we see in our seasons.” 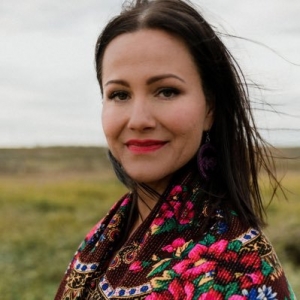 “It’s a huge honour to be trusted with this piece. It’s a challenge but I always think of what my Mushum told me, ‘Don’t speak with fear, speak with heart’ that’s my foundation for this project,” she says. “This is real, this is raw. We are not in control; we are part of a bigger picture and that’s what my words will reflect.”

For the SSO and its guest artists including violinist Kerry DuWors, this is a chance to be part of a movement to make our world a better place, with the power of art and science combined. The orchestra’s performance of [Uncertain] Four Seasons will be recorded for its worldwide broadcast with other participating orchestras on Nov. 1, 2021, to coincide with opening day of the United Nations Climate Change Conference.

“Art is a mirror, and it reflects back on us the world we are facing,” says SSO executive director Mark Turner. “This performance is meant to be a call to action, something that keeps the conversation going long after the concert.”

Here’s the link for more information about the [UNCERTAIN] Four Seasons project.