What began as a simple storytelling exercise, a way to share a few laughs and learn a little theatre has become much bigger than the participants first expected. When artist/producer Curtis Peeteetuce and filmmaker Marcel Petit set out to create the YouTube series Kohkom for the Library Services for Saskatchewan Aboriginal Peoples (LSSAP) it was a way to build excitement for Saskatchewan Aboriginal Storytelling 2021. They had no idea it would strike such a chord with the community.

“When I ask people who’ve watched the series what they thought their number one response is ‘Those ladies are funny’,” says Peeteetuce. “The honest belly laugh is something we rarely see in film or on the stage and when we do, we all recognize it. We celebrate it.” 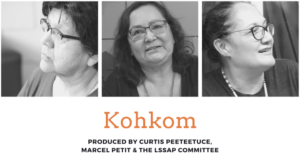 Inspired by his annual holiday play The Rez Christmas series, Peeteetuce gathered together three Indigenous women with an interest in theatre. Over 8 weeks, Donna Lerat, Gloria Myo and Donna Merasty read scenes from the plays, play games and share in often deep discussions about their own lives.

“Bringing joy into the community, especially during the pandemic, it’s a way for us women to tell people we are going to be ok, it’s going to be ok.”

“I’ve learned that we as kohkoms have so much to share,” says Donna Lerat. “Bringing joy into the community, especially during the pandemic, it’s a way for us women to tell people we are going to be ok, it’s going to be ok.”

The participants connected with each other, but the vlog series also grabbed attention of the wider community. Shaw Spotlight has now picked up the episodes to broadcast on its cable channel.

“I felt really blessed by other’s seeing the value in this project,” says Peeteetuce. “That these ladies are being celebrated for all the time they’ve contributed to this project and what their openness has done for storytelling in general.”

The series creators hope it will continue bring people together to share laughter and stories. Peeteetuce says he would be honoured to do it all again and give a boost to Saskatchewan Aboriginal Storytelling.

For a link to the performance, email sas.coordinator@mail.com

You can find out more about the series by clicking here.