Sailor & SSO opening doors for women one show at a time

“When I first broke into the professional conducting scene, I was very much in the minority. It’s been remarkable to see the shift”

Whether it’s conducting a symphony, programming a performance or founding an all-female chamber orchestra, Janna Sailor is always pushing to get more women into classical music. 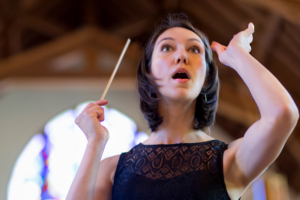 Janna Sailor is coming home to take the podium as guest conductor of the Saskatoon Symphony Orchestra. (Diamond’s Edge Photography)

“When I first started, there were not a lot of female conductors in the mainstream. I would take the podium and you could hear the muttering, ‘Who is this conductor girl?’,” she says. “So, I made it my hashtag on Instagram and set out to create more opportunities for women.”

Sailor is coming home to take the stage with the Saskatoon Symphony Orchestra for Postcards from Buenos Aires Saturday Jan. 30. She programmed the performance to feature the sensual and pulsating sounds of South America. Along with works by celebrated composer Astor Piazzolla and Alberto Ginastera, Sailor was sure to include the work of Argentinian composer Adriana Isabel Figueroa Mañas.

“We are about 100 years behind in the male-dominated classical world. Female composers need that extra support and visibility to make a go of it professionally.”

“It was really difficult to find a female composer from South America. Luckily one of my colleagues introduced me to Mañas,” she explains. “Equality doesn’t just happen. We are about 100 years behind in the male-dominated classical world. Female composers need that extra support and visibility to make a go of it professionally.”

“Janna has been an exciting conductor on the Canadian scene,” says executive director Mark Turner. “She took the idea of a musical trip to Buenos Aires and ran with it brilliantly. This will be an evening of smoulderingly passionate music.”

The admiration is mutual. Sailor is amazed by what the SSO has been able to accomplish with its live stream performances.

“It’s truly remarkable the SSO continuously punches above its weight,” says Sailor. “How they’ve been able to build during this pandemic, build their audience around the world, it’s remarkable and something that larger orchestras have not been able to achieve.”

Sailor is excited to share this music featuring celebrated bandoneon player Jonathan Goldman with the audience and wants them to feel like they are part of the show.

“I hope this performance brings something new, something fresh to the musical landscape,” she says. “I hope the what they hear peaks their curiosity and encourages them to explore more works by these composers.”

For more information and how to buy tickets, follow this link.