Road to recovery: Eaglespeaker wants his music to inspire youth

To say Forrest Eaglespeaker is a survivor is an understatement. His birth father was abusive, his mother and step-father, both addicts, his family engrossed by intergenerational trauma. By his teens, Eaglespeaker was struggling with drugs and alcohol and on the streets of Calgary alone. But even in his darkest days, the Saskatoon-based roots rocker has found comfort in his music.

“Music has always been a place of survival for me.”

Eaglespeaker is one half of The North Sound and the band has just released its second album As The Stars Explode. It’s a collection of songs that run very deep for Eaglespeaker. They deal with his troubled past and new, sober life with his family. 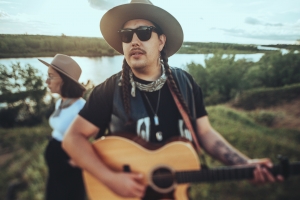 Forrest Eaglespeaker is tapping into his past to give hope for the future with The North Sound’s new record. (Matt Braden Photo)

“The song Better Days, it was the first time I ever wrote sober and I was really insecure about it,” says Eaglespeaker. “There’s a stereotype that comes along with the life of a musician; you know sex, drugs, rock and roll. I didn’t even know if I could write or perform sober. This song is proof that I can. There are some songs you want to write and some that you need to write. I was just the vessel that it came through.”

Eaglespeaker credits his wife and bandmate Nevada Freistadt and his daughter Aspen (2 ) for his renewed sense of hope and the urgency he feels to pay it forward.

“When I was growing up, I didn’t see people who looked like me in music. I didn’t hear them on the radio,” he says. “Sharing my music with Indigenous youth means the world to me on a personal level and on a cultural level.”

For Eaglespeaker, it’s all validation that he’s moving in the right direction. The North Sound has just signed with Juno Award winner Crystal Shawanda’s New Sun Music and the band is anticipating its next move. Eaglespeaker and Freistadt are also excited about becoming parents for the second time. He says his young family and his new music have given his life purpose and he has a message to share.

“You matter. You’re important. You might not believe it, you might not feel it but, you are,” He says. “I want kids who are struggling out there like I was to know that whatever you think you are or what you have to be, you can be so much more than that. You’re deserving of a life better than the one you’ve been given.”

To check out The North Sound, follow this link.