Where there’s a will, there’s a play; Saskatoon Summer Players back on stage

For Saskatoon Summer Players’ artistic producer Anita Smith and her team, staging a show like The Addams Family: A New Musical Comedy during a pandemic has been a skill-testing puzzle. 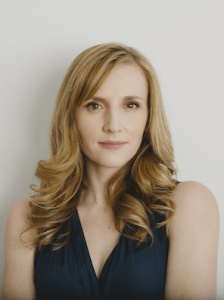 “We have huge casts and live musicians,” she says. “Once we have all those people in the building, we are already at capacity. We really struggled at first figuring out how to do this show safely and follow all the rules.”

Smith and her team knew they had to make major changes if they wanted to see Gomez, Morticia and the rest of the ghoulish Addams family on the Remain Arts Centre stage.

“It has taken a huge amount of creative thinking but artists are used to that. Our team is united in their love of musical theatre and we needed to figure out a way to make it all possible.”

“It has taken a huge amount of creative thinking but artists are used to that. Our team is united in their love of musical theatre and we needed to figure out a way to make it all possible.”

They began with virtual rehearsals and as the show got closer transitioned to outdoor rehearsals. Director Laura Negraeff developed cohorts within the cast so that certain actors, once on set, could have limited contact with each other. Physical distancing is being incorporated into the choreography even in the tango scene. The biggest change is something that Smith hopes the audience won’t even notice. 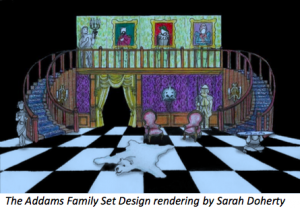 “Thanks to our set designer Sarah Doherty, we have hand sanitizer built into the set. We have plexiglass incorporated into the design as well,” says Smith. “We’ve even painted the floor into a checkerboard grid pattern so the cast has visual markers to maintain distancing.”

Of course, you can’t have a musical without singing, which is particularly risky right now. The big musical numbers that include the entire full cast have been pre-recorded so the performers can be on stage together.

SSP is all about community and staging this musical safely also means keeping the audience safe. The team has taken extraordinary measures to secure the rights to live stream the show for one night only. They’ve teamed up with local film company Bamboo Shoots and are creating a hybrid between live musical theatre and film.

This volunteer-based company, founded in 1964, is built on community support. Smith says they have ticket prices and fun perks for the show that fit every budget. The live streaming means that people from all around the world and right here at home will be able to see the passion and talent of Saskatoon locals.

“These are the teachers in our schools, business owners, your neighbours and they have amazing talents to share,” says Smith. “I hope the community will rise up again to see this show and support us. You might never see theatre this way again.”