Original music, playful puppets and plenty of mayhem await audiences at this year’s panto. The team at Meacham’s Dancing Sky Theatre is excited to present Jack and the Snow Queen (Dec. 7-23, 2018). This show is a collaborative effort with cast and crew writing the piece from scratch. 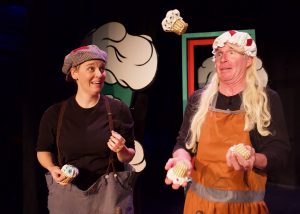 Jack (Crispi Lord) and his long suffering mother Widow Spriggins (James O’Shea) are back for another comedic performance. (Britainy Zapshalla)

“The panto is a blast,” says first time cast member Jenna Bernbaum.”It’s so much fun, you’re thrown into the thick of everything. You’re making puppets, creating music and writing a script while everyone’s just trying to have fun and laughs along the way.”

This story is loosely based on The Snow Queen by Hans Christian Andersen. Our hero Jack must rescue his mother, before the Snow Queen turns her heart to ice.

“It’s something you won’t see anywhere else,” says panto regular Kent Allen. “There’s always a bit of excitement because you don’t know what’s coming up and of course, for the audience it’s always more fun when things don’t run smoothly within the show. It’s a good laugh for all of us.”

“There’s always a bit of excitement because you don’t know what’s coming up.”

The story features  many of the favourite characters that audiences have come to love. The none-to-bright Jack, his mother the beleaguered Widow Spriggins and of course the coffee row puppets Fred and Ed.

“It’s a show for all ages,” says actor Crispi Lord. “If you have big kids, little kids, grandmas and grandpas, this show is a great chance for everyone to do something together during the holidays.”

Jack and the Snow Queen

Lunch & Supper before the show available