The parks are about to come alive this summer with the sights and sounds of live theatre. Sum Theatre celebrates its fifth season in the city with a pair of shows full of surprises and fun for families. The theatre company has become known for its outdoor productions in unusual places.

Its continue that tradition with this year’s offering of The Woodcutter and the Lion. The production will tour through Saskatoon parks during the month of July. It follows the story of a woodcutter who is forced by drought to travel to an island where a dangerous lion lives to find wood for his community. It’s based on a Syrian folk tale and highlights the music, culture, language and dance of some of Saskatoon’s newest residents. “Our story choices are meant to break down the barriers in our community,” says Sum’s artistic producer Heather Morrison. “Theatre is something that connects us all.” 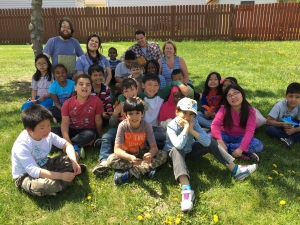 Students from W.P. Bate Community School were out in full force to premiere a song written for the show. Their participation is an example of the family fun that Sum Theatre has in story for families in the park. The shows traditionally include music, puppetry, dance and of course, plenty of chances for the audience to get up and have a little fun with the actors. 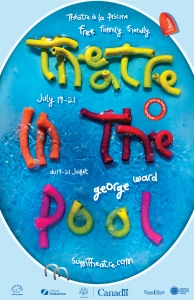 New to Sum Theatre this year is a second play that will take audiences into the deep end. Theatre in the Pool is a first for the company and is being staged to celebrate Canada’s 150th birthday.The company will dive into George Ward Pool to present Earth Diver, a story about how the world began. This show will be the culmination of two weeks of theatre and swimming training for 40 local youth. “We want to do what’s never been done before,” says Morrison. “It’s exciting for us as artists and for the audience as well.” Working with professional artists, including former olympian and Cirque Du Soleil performer Fred Nichols, the company will perform the show in water.

Sum Theatre is also marking its fifth anniversary with a chance for the community to get involved in its productions. Its launched the Be Part of SUMthing Great campaign. In the months of June and July, the public will have a chance to make a donation and see their funds go directly towards the groundbreaking theatre it produces. “There are people who come out to our free performances and are looking for a way to give back,” Morrison explains. “We have an overarching goal to improve the lives of every single person in Saskatoon whether it’s with our free summer performances, our drama classes in the schools or our many community building experiences. We believe in the power of community and the power of theatre.”

Theatre in the Park

The Woodcutter and the Lion

Theatre in the Pool