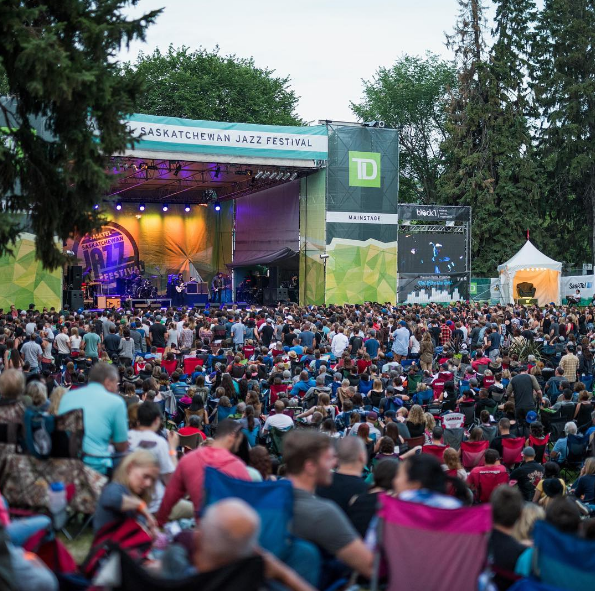 A shot of the mainstage at Saskatchewan Jazz Fest 2016. (SaskJazz / Instagram) 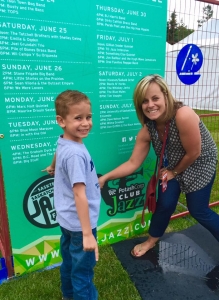 My son Willliam and I at Club Jazz last year. (Facebook)

It’s the most wonderful time of the year, the closest I get to Christmas Eve in the, well almost spring. That’s right folks the SaskTel Saskatchewan Jazz Festival has just released its lineup for June 23 – July 3, 2017. The 31st installment is chalk full of Canadian talent and even a few surprises. Here are a few of my highlights.

Surprise of the Season

It’s a ticket I never thought I’d be able to buy in Saskatoon and she’s kicking off the festival this year. Amanda Marshall was all over radio and her CDs flew off the shelves in the late 90s. The Canadian pop-rock singer all but disappeared from the musical landscape after the release of her third album Everybody’s Got A Story. Although she’s not said much about it in the press, her absence was due to legal battles with her former manager and her record label.  These days, Marshall has new music in the works and does a few select dates every year. Bridge city get ready to hear Amanda Marshall’s hits live on stage.

This is going to be a show that will take you back to the big band days where jazz was great and dance halls were full. Igor Butman is know as the guiding light on Russia’s jazz scene. He’s played for some pretty powerful audiences including Bill and Hillary Clinton and is a personal friend of Vladimir Putin. Butman plays a mean saxophone and it’s sure to be a great show.

These guys just started out as an eccentric cover group that made pretty cool YouTube videos. Walk Off The Earth has become much more in the past decade. The group has gained world wide fame for their use of unusual instruments appearing on Ellen, the Grammy Awards and headlining several international tours. The group released its sixth album Sing It All Away in 2015.

If you’re looking to expand your musical horizons, you will want to check out this contemporary jazz show. Sisters Christine and Ingrid Jensen have composed for jazz orchestras around the world and they’re bringing their latest album Infinitude to the festival. The show is described as a musical conversation between the artists and the audience. This act has 20 years of performing behind it and jazz lovers this one’s for you.

She had our number when she appeared at the SaskTel Saskatchewan Jazz Festival in 2013. Since then, Serena Ryder has recorded a new album and received critical acclaim as well as a string of Juno awards. Ryder is working on a new album Utopia set to be released this year. This show I’m sure will be a sneak peek at those tunes as well as full of her hits.

Club Jazz is always a favourite stop for me at the jazz festival and this year is promising to offer a wide range of local talent like.  The best part is it’s all free so this is a perfect way for the whole family to enjoy a little music. Located in Friendship Park (at the base of the Broadway Bridge), you can discover new local acts and see many of the mainstage opening acts for the festival. The full schedule will be released on April 27th so stay tuned for that.

Michael Franti, Feist, The Blind Boys of Alabama, Kenny Barron and Jack Broadbent, there are just too many amazing concerts to mention them all.

Click on the SaskTel Saskatchewan Jazz logo to get a full lineup and start your summer planning. This year, the festival is offering a new option to music lovers. You can build your own bundle of shows (3+) and receive a discount. Tickets go on sale Friday March 24th at 10a.m.