*Because I’m based in Saskatchewan, all listings are given in CST.

Two powerhouses in children’s entertainment here in Saskatchewan have teamed up to bring a little break to new parents. Wide Open Children’s Theatre and Sylvia Chave are up on Facebook every morning with a new performance for your kids. There will be sing-alongs, stories and tons of fun. This is quality screen time as the performers have really put thought into interactive, calm stories and songs that won’t rev your kids up. It also just might be the chance you need to drink that cup of coffee.

The time away from the big concert halls has given the Saskatoon Symphony Orchestra time to turn the spotlight to individuals rather than the whole. The SSO is presenting intimate interviews with Maestro Eric Paetkau and individual artists within the orchestra. This week’s guests are principal bassoonist Stephanie Unverricht and concertmaster Michael Swan. It’s a chance to connect with the musicians and ask your own questions.

You can find the next chat here.

It’s the perks of a house concert with your own snacks. SaskMusic and CBC Saskatchewan have partnered to live stream a series of concerts live for the next few months. Tonight country and folk musician Eli Barsi will take the virtual stage. Sunday one of the nicest guys in music Aaron Karpinka will perform songs from his new album and Tuesday indie singer/songwriter Aurora Bella will perform.

Tune in here for the concert series. 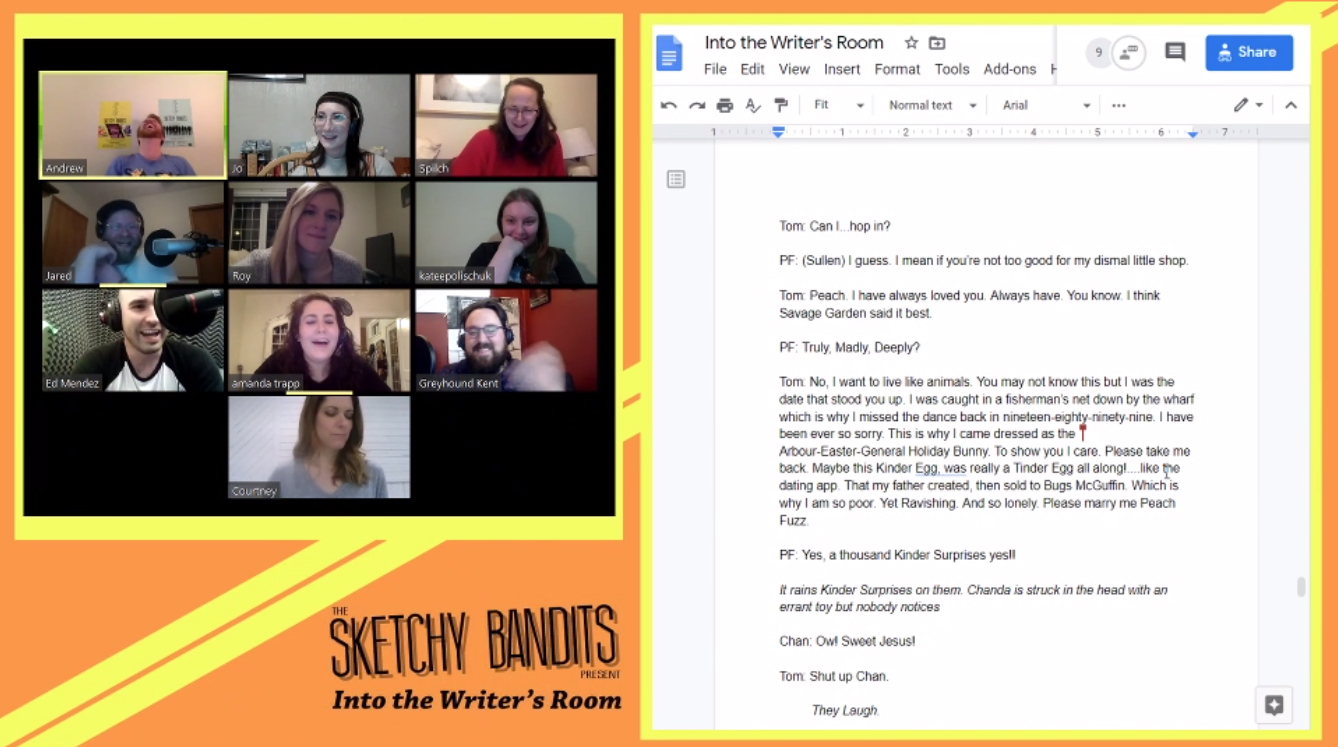 The Sketchy Bandits bring you into the writer’s room to help write the next great skit. (Facebook)

Into the Writer’s Room

If you’re a fan of sketch comedy like the Kids in the Hall or Saturday Night Live, you’ll love heading Into The Writer’s Room with The Sketchy Bandits. This troupe of local actors are letting you be part of the behind the scenes fun as each week they take suggestions from the audience and write new sketches right in front of you. There are also fun challenges for the actors to complete like “Change your entire outfit in 60 seconds”. This is one online meeting that will leave you laughing.

Join in on the fun here.

If you’re looking for a house party on Friday night, Live Nation is the place to be. The world-wide concert promoter Live Nation is hosting concerts most nights with some pretty big names. This British band takes its cues from greats like The Police and The Beatles. These guys started out their music career busking so you know a concert from their living room is going to be good.

Keep on rocking with this link.

It’s theatre of the now and in its 3rd Season, Sum Theatre has had to respond by going from its small Broadway venue to a virtual event on Zoom. This production is all about responding to the news events that are front and centre this month. The show this weekend will showcase music from Vancouver musician Patrick Spencer, a brand new play by Johanna Arnott an interview with Jason Praski about Saskatchewan’s interest in renewable energy after the pandemic and Elizabeth Nepjuk will be the featured ranter . Sum Theatre says going online also allows the audience to stick around after the show and chat with the artists.

The Zoom link will be posted the day of the show and you can find it here.