He was a hunk of burning love and has fans worldwide but sadly, Elvis Presley died before many of could see him live. Elvis’ music and his career are front and centre in a tribute act that’s been taking North America by storm. A Tribute To Elvis In Concert has two artists, Toronto’s Pete Paquette and Chris Connor from the United Kingdom paying tribute to his huge catalogue of hits. From Elvis’ early years all the way to his 1968 Comeback Special, you’ll be able to sing along to your favourites. Tickets to the show are $57.

There’s nothing better than the sound of two voices blended in perfect harmony and when you come from a family like the Trudel’s you were born to do it. Jay & Jo are two sisters from the famous Saskatchewan family who’ve branched out into their own career as a duo. The sisters release a debut album Grounded and Light last year and are back on the Saskatoon stage for a show. This is a family friendly event and is a great way to expose your kids to the amazing talent right here at home. Tickets are $20 – $25. 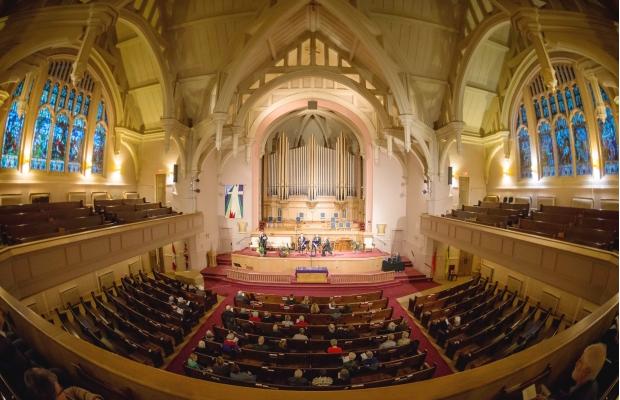 After more than a century of worship and performance, Third Avenue United Church will close its doors with one final concert. (Photo Courtesy of Saskatoon StarPhoenix)

It’s been the home of a faithful congregation for 113 years and now the church’s members and local artists will have a chance to pay musical tribute to the historical building. Third Avenue United Church has faced a dwindling congregation and massive upkeep bills for many years now. Many organizations have tried to find ways to keep the building running. Though the designation as a historical site has kept the building from the wrecking ball, the congregation can no longer afford to worship there. To mark the moment, local artists like Dean McNeill, Michael Swan and Janet Mills will take to the stage to perform once more. Admission is free but donations will be accepted at the door.

Saskatoon Pride is back with another year of family fun and celebration. This year’s festival officially kicks off on Sunday with a family swim at the Travelodge Hotel and Art in the Park at Ashworth Holmes Park. Other events you won’t want to miss with the family include Friday’s Drag Queen Story Time at Frances Morrison Library. The Family Day Carnival next Sunday at the Forrestry Farm and the big parade on June 23rd right downtown. There’s also the Live in Colour Fashion Show at the Hilton Garden Inn next Friday and the Pride celebrations round out with a full weekend of fun on the mainstage at River Landing June 22 and 23 with artists like Mo Kenney and Matthew V. Ticket prices vary from free to around $50.

Click this link for full details on the festival and more ticket information.