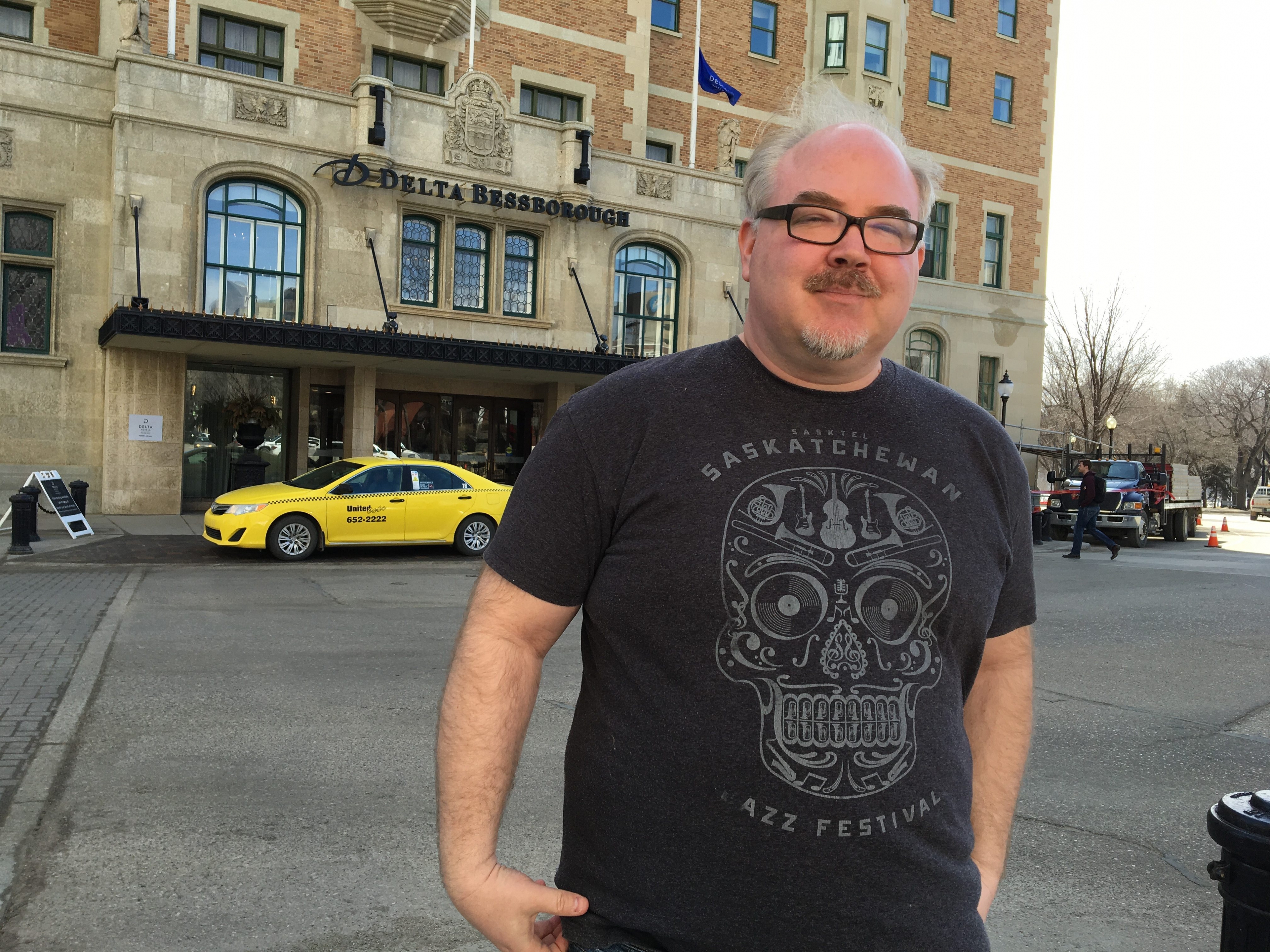 If you see Kevin Tobin walking downtown Saskatoon with a smile on his face, there’s good reason for it. Tobin has just finished releasing the complete lineup for the 2018 SaskTel Saskatchewan Jazz Festival. The final list of performers that will entertain on the city’s free stages were released in the wee hours this morning. 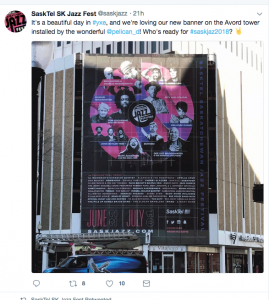 Another sign of summer is the huge banner announcing acts that was unfurled yesterday.

Planning an event like this is an enormous feat. The free stages alone are 95 hours of live entertainment to schedule. This year from the Bessborough Gardens to the clubs and even the streets, Tobin says the program is a departure from what people have seen over the last couple of years.

“This is a program full of surprises!”

“This is a program full of surprises!” Tobin explains, “Of course, we’ve heard from Tom Cochrane, City & Colour and Dee Dee Bridgewater but, many people have said to me they don’t recognize a lot of names on the lineup. That’s exciting for me because it means we get to introduce audiences to a whole new list of amazing musicians.”

Spread out around the downtown, the free stages are a chance for young up and comers to break into the festival and earn an audience. So here are my picks for a few of the free stage shows you may want to check out June 22 – July 1, 2018.

Denise Valle is an R&B act out of Saskatoon. Her music is a soulful blend of influences and definitely a sexy evening out at the free stage or later that same evening at The James Hotel. You may have heard her before as part of the Ness Creek Music Festival.

Rock, reggae and latin rhythms collide on the dance floor when Minivandal performs. It’s hard to beat a rock band that has a horn section and these will be energy infused performances. Ben Fortosky on horns has a special place on the jazz festival landscape because this young musician came up through the TD Jazz Intensive. That’s the musical mentorship program for aspiring musicians that runs alongside the festival every year. Minivandal will be opening for Brooklyn based saxophone dance band Moon Hooch at the Amigos Cantina show.

Another Saskatoon phenom that’s been lighting it up on the music scene is Kyle Krysa. He’s been hitting the skins for 20 years and studied at Grant MacEwan University. Krysa’s music blends his own natural talents with electronic beats and jazz roots. This is a great way to push those musical traditions and experience something a little avant-garde.

Another band that’s sure to get you up on the grass at the free stage is the Connor Newton Quintet. This band debut at the free stage last year and as you can see from the crowd, people had a blast. Newton, originally from North Battleford, now lives in Saskatoon and lends his talents to many groups in town. He studied saxophone at Grant MacEwan University and the University of Toronto under musicians like Gordon Foote and Kelly Jefferson. This is a show that fuses hip hop and jazz together in one groovy afternoon.

If you’re looking for something a little more traditional but still progressive jazz, why not check out the work of the Gerard Weber Group. Led by Gerard Weber, this band’s show is a celebration of its own original tunes and the work of legendary guitarist Pat Metheny.

For full lineup details on the SaskTel Saskatchewan Jazz Festival, click this link.